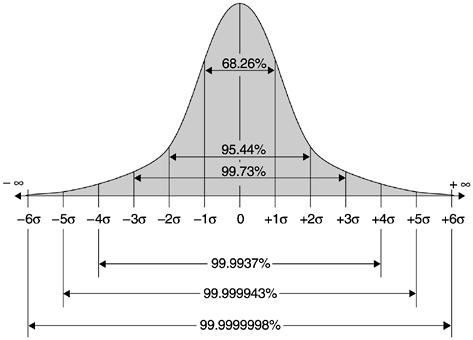 Most of you know who are Fortune 500 companies. They are 500 most revenue generating companies of the world. In list of them you can currently see Apple, Samsung, Toyota, General Motors, Daimler, BP, Lukoil, Koc Holding and many other famous names.

More than 53% of those, actively using Six Sigma in their operation. If you look to the top 100 of those 500, then this indicator goes up to 82% where Six Sigma part of business culture. Can it be a random thing? According to study during the last 20 years those companies saved more than $400BLN just because of the Six Sigma practices. Or 2% of revenues are saved just because of that. Not bad isn’t it?

Starting from year 2012, Six Sigma became part of my life. Even do, at first it seems to me simply as a methodology with set of tools, but then while getting more involved, obvious benefits started showing up. Normally in organizations data only needed when to punish or reward people (isn’t it?). Here it promotes data usage for continuous improvement and emphasizes the value of real teamwork to get results on place.

Six Sigma was first invented and developed by Motorola in 1986, but it gained more popularity after Jack Welch made it as main ideology of General Electric in 1995.

Do, continuous improvement is a very big subject, I’ll try to cover with this article main parts of it so that we have a taste of it. I’ll come back to this area over time with more in-deep subjects.

Now lets go through, what is that magic about? How it works and how you can benefit from it?

In Six Sigma methodology, everything is around to satisfy customer (both internal & external) needs. So , if you define customer needs and their acceptable range of product specification, then whatever falls out of that range can be defined as defect. Let have few dummy examples:

So, less defects you have, more satisfied customers you get and more competitive edge you catch. In most of the cases while reducing the defects, you improve the processes as well and there you experience high level of cost reduction.

If we think about variation now, then it is easily can be described as distribution of observation for particular set of events. If we take banking example from above and observe a set of issued credits then we will see a picture of 70% of credits is paid within 0-5days, 20%: 5-10 days, 10%: more than 10 days. If we see the average of payments as 6 days, then by looking how far away from 6 we have particular credits; will give idea about the variation of process. As extreme examples: If everyone pays exactly on 6th day, then variation is 0, but, if you have people paying at day 0 and also the ones who pay at day 30 , then you have huge variation of events. Variation is not good sign for the processes and it should be diagnosed.

Six Sigma targets to reduce both defects and variation in any given process. Even do, variation can be within acceptable limits of customer, but variation can be reduced to get highest quality of product and gain in competition.

Sigma actually is statistical term, which can be translated as standard deviation. We will not go into the statistics but with the following chart it will be easy to describe over the Six Sigma.

This is typical chart of normal distribution. It is the distribution, which is very much referred in statistics to describe any process or outcome. So the middle of this distribution is where most of observations fall (lets say, out of 100 observations of wall thickness, 40 fell to 20cm, some will be less, some will be more), and to the both sides you can put number of occurrences at particular level.

So 1σ process is covering 68% of total observations where as 3σ process covers 99.7%. If we check the 6σ then this number is 99.9999998%, which means that for 1mln observations you get only 3.4 defects. So if your process is real Six Sigma process then in banking example it is 3 credits from 1mln which will be paid later than 10 days. In Construction example it is only 3 interior walls from 1Mln built which are whether less than 15cm or more than 20cm in width.

Of course having all of the Six Sigma’s available in your process can be quite costly to get but in some industries it is a must to have Six Sigma. As one of our fellow friends in Six Sigma joked always, “If NASA wants to go to Mars, they have to go to Mars, not somewhere else”. Therefore in these sort of examples it is critical to have it 6. In your industry you have to just decide for yourself about which level of sigma you are fine deal with on particular subject. Since further we will see that improvements may/will be linked to some costs and at some point there will be no sense to improve further. (MC=MR, just recalling the economics)

Your customers deserve speed and quality at lower cost

Just imagine. You are producing cars and there is a factory, which gives 1000 cars/day. Good imagination, no doubt about that :), but, what if you realize that 10% of them fail to pass the out-of-factory tests and another 10% are returned back by customers by some sort of failures. What is impact of this event to your business? Where you get the hit?

As you can see both from customer’s perspective and from company perspective it is not a enjoying situation. But, if that company will apply Six Sigma methodology and educate its analytical staff on handling through the tools, then, core reasons for these failures can be eliminated and no additional rework will be required. Even, while applying Lean Six Sigma methodology, company will achieve to eliminate waste in process and increase the production from 1000/day to 1200/day. Overall improved impact can be seen at all 3 dimensions of speed, quality and cost.

Now, think about your business for a while. Where you think that defects can be eliminated? Where you need to improve the process so that it is maximum lean? I’m sure that there are a lot opportunities for out there which can improve your operation instantly.

The word of “Process” can sound to us as part of Corporate high-five culture, but whatever we call it, that is what defines the “HOW?” part of our job. How we deal with particular deliverable, sales, marketing and other activities? How much time it takes to produce a product end-to-end? How many people are involved and what is the distribution of real value adding work versus waiting/signing and this sort of non value adding components ?

How will you feel if you understand that out of 100% time spent on a particular process, only 30% consist of activities which are really value adding for customer? Not good, I’m sure. It is the same as driving the Ferrari car in the race, with 50km/h speed, where the possibility is around 300.

The processes need a Lean approach. Not for one time, but on continuous pace to achieve the high level of speed and value. Lean Six Sigma approach was firstly introduced by Japanese companies and then after was exported to the whole world. The idea here is to make sure that processes are waste-less, meaning fast and on quality. If you imagine that your processes will be twice as fast and consuming twice as fewer resources, wouldn’t it be magical? Both speed and resources will impact your financials positively as well as having happy customers with consistent and faster delivered products.

From where to start and how to proceed?

1 Everything starts from Management understanding and commitment on continuous improvement concept using Six Sigma methodology. I have seen many cases where those initiatives failed to get realized just because of the lack of management commitment on these initiatives. It should become a part of company culture and management are those who promotes it. Therefore they should be sponsoring and supporting it.

2 Right competences should be on place. Companies should grow their analytic people and make sure that they have right competences applying Six Sigma methodology. In Six Sigma there are several roles and levels of education for the methodology. In order to get Green Belt of Black Belt certifications employee should run a real project and deliver improvement on that, while proving his capabilities. The difference between Green belt and Black Belt is about the including the phase of the improvement or not. It is rather hands-on certification than just a reading book and answering to multiple-choice questions.

3 Tools and data availability is critical part of the subject. As you understand it is all about the data analysis, finding root causes and improvements. Therefore you should make sure that you collect needed data continuously and have needed applications available to work with those collected pieces of intelligence. Mainly used application and well known one is “Minitab”, where as there are plenty of open source quality management and continuous improvement tools available in the market.

4 And the last but the most important is promotion of team-work in the organization. Black Belts cannot change the world themselves. There is a need of collaboration and willingness to improve things. This is the ideal situation where everyone understands the criticality of the subject and come together in order to realize the improvements and control the results.

I hope you will enjoy observing improvements in your own business just by using this simple but magical methodology, Six Sigma.

I’ll be also happy to consult and support you with decisions in regard to your implementation. Free of charge! 🙂